I’m a self-taught programmer. When I started out I just wanted to build things, often without a clear plan, and learn while doing so. Open source allowed me to do that. It not only provided the tools, but also access to the thought processes of the people who were building this cutting edge technology.

In the late 80s my dad, who used Sun workstations in his research, introduced me to Unix; and later in the 90s we heard about Linux, which was new, free and worked on home computers. That’s when I started to learn more about open source software, but back then I was a consumer, not a contributor.

When the web came around, I had been a hobbyist programmer for years, writing little software utilities and games for my own amusement. I was just finishing high school when I first started using relational databases and learned about SQL. I was working for my friend’s company, where I sat in front of an SGI O2 workstation and built very early dynamic websites. In most projects we used the proprietary Solid database. I wanted to create my own websites, but proprietary databases were out of my reach, so I started looking for free software alternatives.

"Back then I was a consumer, not a contributor."

In 1999, a friend of mine introduced me to PostgreSQL. I’ve been working on it, and with it, ever since.

Back then, open source communities and projects often revolved around a small group of people whose personalities and interests defined those communities. Most of the projects worked through mailing lists where change proposals were debated. Patches by new contributors rarely made it through on the first try.

This was sometimes discouraging for first time contributors, but taking part taught me a lot. It also felt pretty exciting when your patch was finally integrated and you saw your name in the changelog of a new release.

"Open source not only provided the tools, but also access to the thought processes of the people who were building this cutting edge technology."

Today, open source is more widely accepted and more successful than ever before, and a great variety of companies have used it to create valuable things. But the world of technology and software is always changing, and the companies built on open source face a new challenge: the cloud is becoming the de facto standard deployment environment for all kinds of applications. Some companies have reacted by turning their backs on the open source community, which is a shortsighted move by them. I believe that open source will survive these changes and keep thriving.

During the 2000s I watched with Hannu [Valtonen] and Mika [Eloranta], both of whom I met at F-Secure, as AWS grew in popularity and Google Cloud and Microsoft Azure emerged. And we drew our own conclusions: in the future all applications would be built in the cloud, where you can define all parts of an application’s lifetime in terms of software.

Eventually, we three left F-Secure to start a new company. We helped organizations in the Nordics to get the most out of PostgreSQL and other open source database engines. 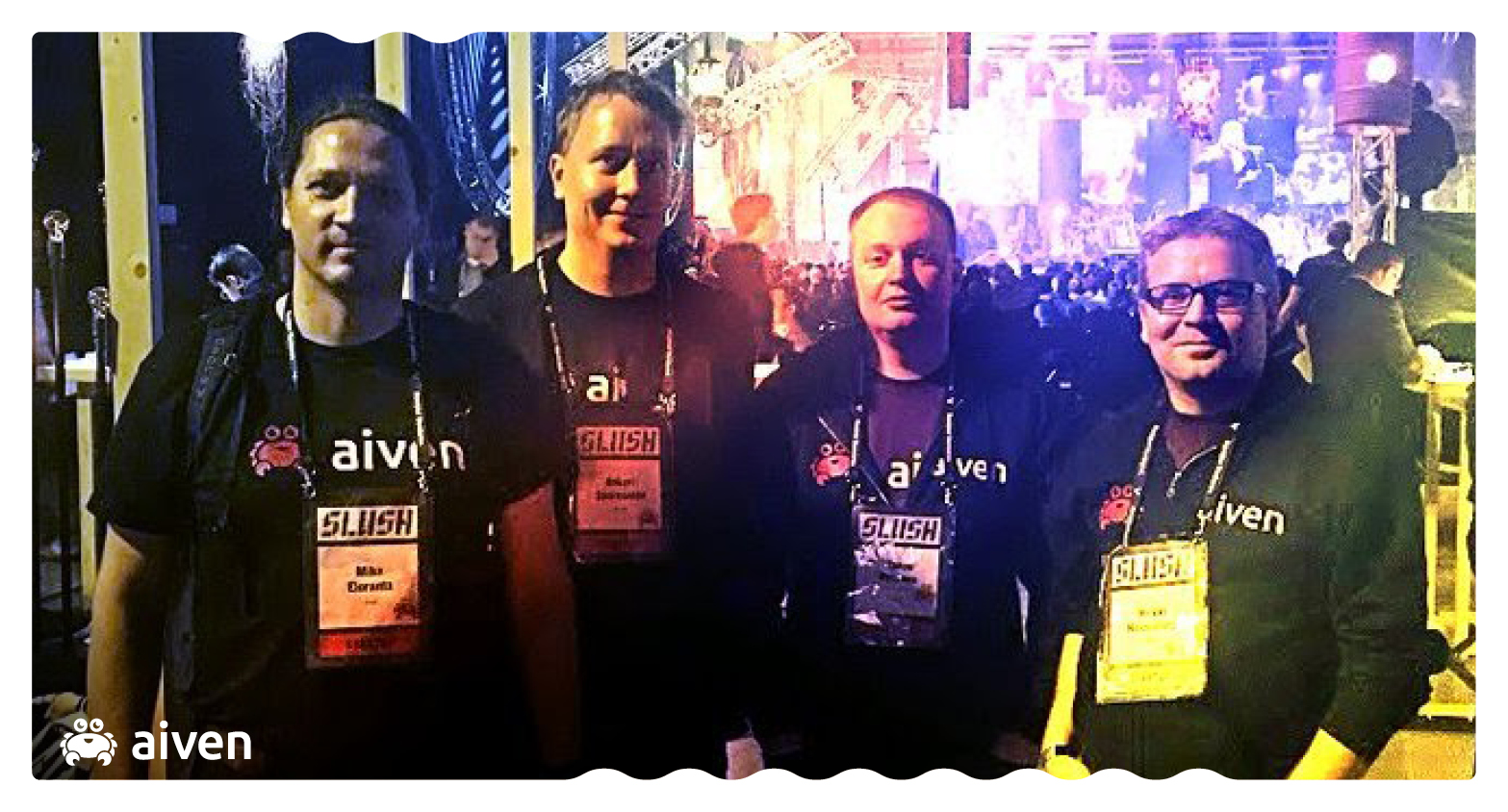 In 2015 we decided to stop doing consulting gigs and started working on a new idea: a multi-cloud data platform that would productize our expertise on PostgreSQL and other open source technologies. In this we were joined by Heikki [Nousiainen] whom I’d known since high school and who had signed me on to F-Secure years ago. We wanted to put Kafka at the core of everything because it allowed for such a clean and neat architecture, but when we tried we quickly learned how supremely difficult it is to operate. So we decided to also offer it as a service to future Aiven customers. Looking back, that turned out to be a very good decision.

"We started Aiven to build something we would have loved to use ourselves."

We started Aiven to build something we would have loved to use ourselves in our previous projects. We wanted to make a service that allows developers to worry less and get more stuff done.

We’re still doing all that, but we’ve gone from four founders with an idea to a thriving globally distributed company of 140, working with developers across an awesome variety of organizations using software to build meaningful things.

With the fresh Series C round of funding, we’ll be able to take Aiven even further. We’ve always been fans of open source at Aiven, and as we’ve grown and become more successful, we’ve become more and more dependent on open source projects and communities. Our own contributions have mostly been occasional stabs at scratching our immediate itches, but now we finally have the resources to significantly step up our contributions. 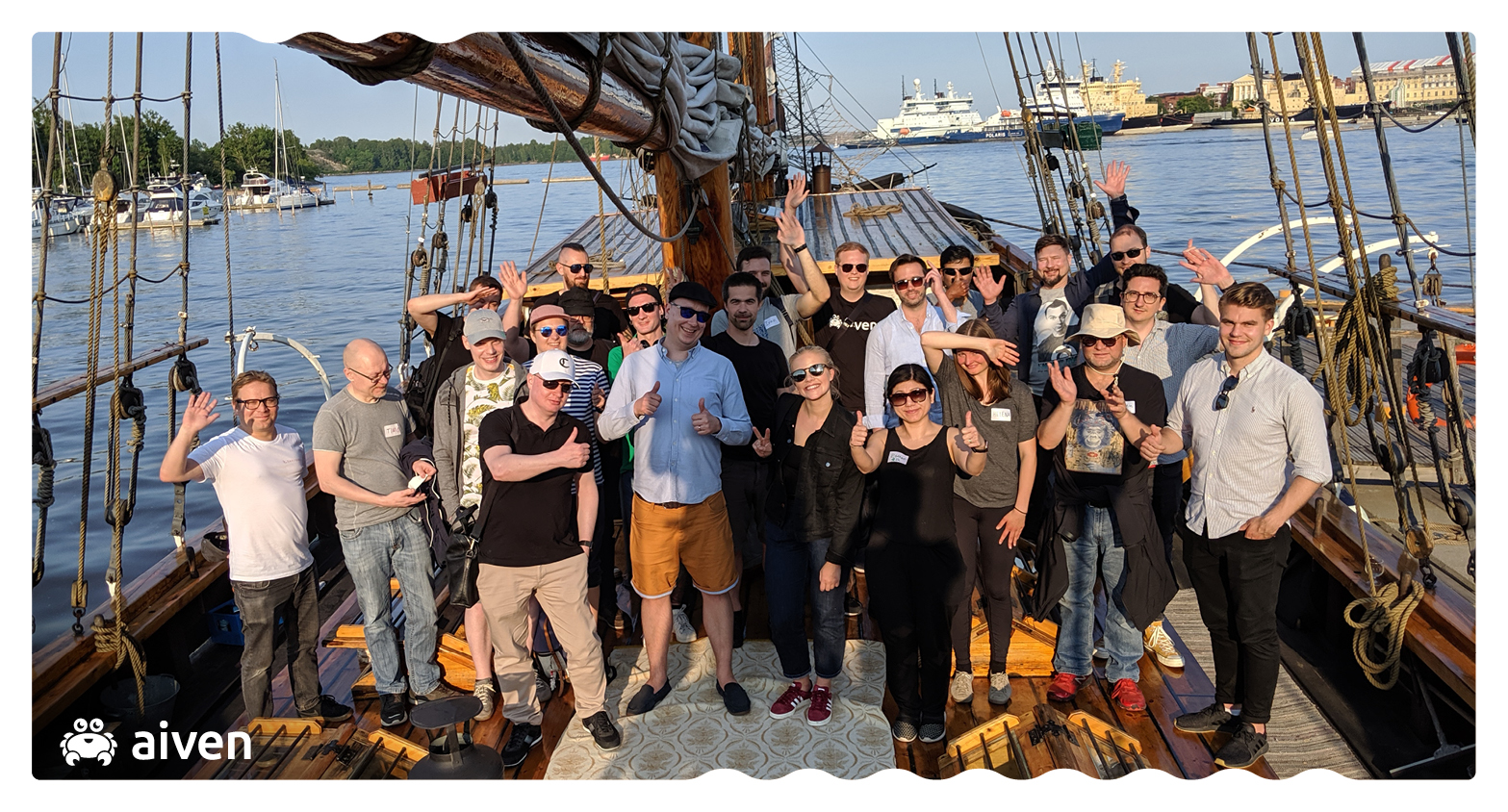 To learn more about Aiven’s Series C funding round, see our announcement post. The Aiven <3 Open Source page tells you about our OS contributions. And we’re always looking for new talent to join us in our exciting journey, so please have a look at our Careers page to see if there’s anything you’d like to help us with!